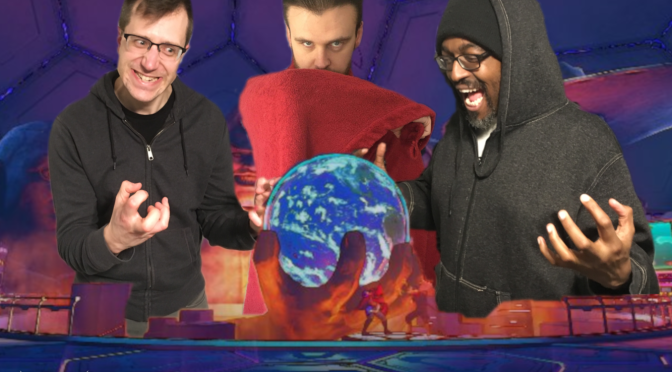 Villains are just plain terrible. Sometimes they’re trying to end the world, sometimes they’re turning woodland creatures into evil robots. But mostly all they want is to bring back swing music in the 90s, big brass bands and all. We have Cameron from The Mad Gear and joining us to sing along with these villainous hits, and think back fondly of all the bad guys who tried to destroy us.

Rising from the streets, crawling out of the slums, a force known as The Mad Gear is gaining critical mass in Turbo Citysince 2014. They are draped in leather and denim, and armed with the toughest tunes from video games past, and original compositions of their own.

They are bad enough dudes to rescue the president, but probably won’t due to issues with authority.

Tune in as we focus on the works of composer Yoko Shimomura! She has worked in the business since the 80s with such amazing music ranging from Street Fighter II to Kingdom Hearts. Rob and Pernell share tracks from her amazing career, and share stories of old arcades, and mythical animals.

This episode is the first of our monthly Patreon-only live streams! We setup a camera in the studio and allow our Patreon members to watch us record the episode live! It was a blast to do and we can’t wait to do it again next month! 🙂  If you would like to be a part of these exclusives, head over to our Patreon page!

You did it!  This is your time, this is all for you. This is your video game music victory.  We listen to great music composed for celebratory sections of games.  Not necessarily RPGs, but any game where you have become victorious.

We’re joined this week again by our good friend Matt Waldron of Pernell and Matt Play Games!  He brings some great tunes, and some great discussion.  He’s a great guy!  Check our his show on Youtube!

Rhythm and Pixels is a weekly podcast devoted to great music composed for video games. Hosts Rob Nichols and Pernell Vaughan pick tracks based on topics and discuss the music and games.

Got a topic suggestion? Let us know at: rhythmandpixels@hotmail.com